[Solved] How to use Picture in Picture iPhone 7/8/X?

Part 1: How does Picture in Picture iPhone works?

Picture in Picture on iPhone is a great little convenience feature that is very beneficial on whichever iPhone version you use. While watching a video on a compatible app, you may need to reply to a text of someone, check your email, or check up on the weather. For this reason, whenever you swipe up the screen to go home, your video will shrink down and continue to roll in a short window view. This feature will work with FaceTime calls also. It means you can switch to any app you want to operate for as long as you want on your device without the video go away. The following sections let us learn about Picture in Picture on iPhone 8 Plus to iPhone X and operate two screens or more on your phone.

Are you wondering about Picture in Picture on iPhone 7 Plus or whether it will support YouTube? Stop worrying because your iOS device and many other platforms have the option of enjoying this facility. For example, Apple has included the ability to use PiP in some of its apps, including Apple TV, Safari, Podcasts, iTunes, FaceTime, and your camera feeds in the Home app. While updating for iOS 14, any third-party developers such as Disney+, Twitch, and Netflix can add the new feature to their apps. As PiP is supported, you will be able to see the video shrink magically down to a small thumbnail and still keep playing. Though there is a catch, the YouTube app supports Picture in Picture only if you have a YouTube Premium subscription to use it.

Part 3: How to use Picture in Picture on iPhone?

Picture in Picture playback exists on the iPad since the year 2015. It took Apple more than a few more years to bring PiP to iPhone. One of the cool new features that you will find for the iPhone in iOS 14 is the Picture in Picture on SE to Picture in Picture on iPhone X, iPhone XS, and iPhone 11. The addition is also available in Picture in Picture 7 and Picture in Picture 8, allowing playing video from one app while navigating around the rest of the device. With two app-at-a-times multitasking, the video will keep playing in a small thumbnail window. Now, lets see the steps regarding how to use Picture in Picture on iPhone. Step 1: Go to Video App First, go to a video app like the Apple TV, a live-streaming platform, or the Twitch app and play a video. Step 2: Go to Home Swipe up and go home, or you can press the Home button on non-Face ID iPhones. On top of your Home screen, the video will start playing in a separate floating window. You can navigate around, and the Picture in Picture video will keep playing. Step 3: Change the Sides If Desire While playing the video in PiP, you can drag it around to move it to a different corner of your screen. You can swipe it off the side of the display to conceal it or swipe at the side the PIP is now. The audio will keep playing, and the video will be hidden. From a small pull-tab, you can restore the PiP. Step 4: Control Settings Edit the size of the PiP window by using two fingers and then pinch to zoom the window and make it small or large. By tapping twice, you can also quickly maximize or minimize the windows size. After then, you can tap on the PIP once to bring up controls. Press the top-left X button, and the video will close instantly. Or you can press the top-right button to return to the source app. It will also remove the PIP. 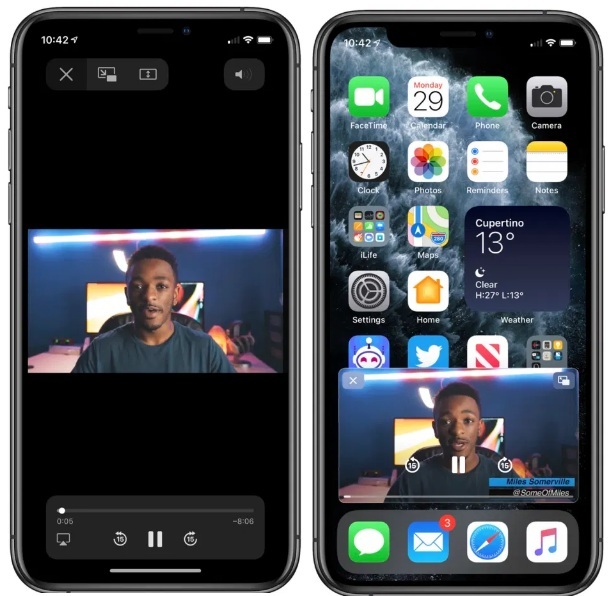 FaceTime app is mainly for iOS users. In FaceTime, you can make video or audio calls to your friends and family, no matter whether they are using an iPhone, iPod touch, iPad, or Mac. With the front camera of your device, you can talk face-to-face or switch to the rear camera to show what you see around. You can capture a moment of your conversation by taking a FaceTime Live Photo.

2. How to use PIP in FaceTime?

The FaceTime Picture in Picture (PiP) mode on iPhones has become more accessible. With apps like Vimeo or on a FaceTime call, you can watch a video or do something else. Lets see how to use Picture in Picture on iPhone with FaceTime. Step 1: Go to Home While on a FaceTime call, press Home or swipe up to display your Home screen. Step 2: Switch the Task and FaceTime Call The FaceTime call window scales down and appears as a thumbnail. Switch to any other app now while on the call. You can return to a full FaceTime screen anytime with a tap on that tiny maximize icon.

Step 3: Modifying Options PiP allows modifying the video window by Conclusion Finally, at the end of our discussion regarding Picture in Picture on iPhone 7/8/X, I hope we successfully taught you by delivering the information that can clear your confusion. Thus, implement the above process into practice and get fruitful results on your next iPhone PiP.
Video Editing Tips
Trim Videos
Rotate Videos
Picture in Picture
Merge Videos
Cut Videos
Crop Videos
Clip Videos
Best Video Editor